We use cookies to provide you with a better experience. By continuing to browse the site you are agreeing to our use of cookies in accordance with our Cookie Policy.
Home » ADVANTAGES OF A FLEXIBLE SORTATION SOLUTION IN THE AGE OF E-COMMERCE
Press releases are provided by companies as is and have not been edited or checked for accuracy. Any queries should be directed to the company issuing the release.

The key to unlocking your R.O.I. potential

As e-commerce companies grow, many of them face the same challenge: how to increase capacity in the current facility, while reducing costs and maximizing customer service.  Far too often, companies sacrifice one for another.  They find themselves asking “how do we reduce costs AND improve capacity and the customer experience at the same time?”.  The secret to this problem lies within the four walls of the fulfillment center.

With this in mind, let’s look at the costs that a fulfillment center must consider.

The costs associated with INFRASTRUCTURE are often the most prohibitive costs for a growing e-commerce company.   Savvy executives are looking for ways to minimize infrastructure costs associated with an existing facility or new real estate.  Whether it’s finding ways to do more with what they already have or working to minimize the size of what they’ll be required to purchase or lease, this strategy can be the difference between driving growth today and maintaining the status quo forever.

Unless you’re the proud owner of a vending machine, the LABOR COSTS associated with your fulfillment operation are always at the forefront.  E-commerce executives can no longer simply push for head-count reductions without also considering peak vs. non-peak seasonal impacts.  They must ask “when peak season comes, will we be able to find enough labor to fill our skilled vs. low-skilled positions?”.  The most ideal fulfillment strategies allow for improvement of both variables.

Even the smallest of e-commerce entrepreneurs are familiar with the concept of CAC, or Customer Acquisition Cost.  And as their organizations grow, the tracking of Customer Acquisition and Retention Costs become a bellwether for success.   Just as the marketing department has a role to play in CAC and CRC results, the fulfillment center plays a role.   When shipping costs and speed are a major influencer for 80% of your shoppers1, a quarter of your audience (23%) is making decisions to buy based on social media reviews1, and 92% of consumers will buy something again if the returns process was easy2, the fulfillment center simply cannot afford to fail in holding up end of the bargain for CAC and CRC success.

Within the four walls of the fulfillment center, reducing the costs of infrastructure, labor, and CAC simultaneously requires the kind of flexibility that only flexible, forward thinking automation can provide. This kind of automation can encompass many pieces of equipment, but at the heart of every successful system is a flexible sortation system.

This begs the questions: WHAT MAKES ONE UNIT SORTER MORE FLEXIBLE THAN ANOTHER ONE?

This white paper will demonstrate why and how one sorter stands above as the most flexible sorter for e-commerce fulfillment based on these criteria.

EUROSORT BOMB BAY SORTER – THE PINNACLE OF FLEXIBILITY IN FULFILLMENT

By design, an effective sortation solution must contribute to cost savings and result in an acceptable ROI for your organization.  Tapping into the EuroSort Bomb Bay Sorter’s unique capabilities and patented design is allowing many ecommerce companies to achieve impressive ROI’s, as illustrated by the following examples.

The patented design of the EuroSort Bomb Bay Sorter allows it to sort to the smallest destinations in the industry, saving space, and allowing for more destinations in the same footprint, increasing wave size and pick efficiency.  In an e-commerce fulfillment center, this has huge implications, allowing companies to utilize the space available more efficiently, increase pick efficiency, as well as potentially avoiding a costly move. 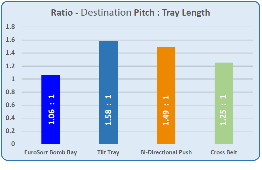 When a well-known children’s apparel company was looking for a solution to automate their DTC order fulfillment process, it was originally thought that they would need to build an add-on to their existing facility to accommodate the new automated process.  When evaluating comparable technologies, it was discovered that the EuroSort Bomb Bay would allow them to save over 10,000 sq ft (ie, 50’ x 200’) in their layout.   This allowed them to stay in their existing facility, increase capacity and efficiency, and avoid the up front and annual costs of procuring and operating a secondary facility.

For another well-known sports apparel e-commerce company, the EuroSort Bomb Bay resulted in significant savings when sourcing a building and mezzanine for their new West Coast FC.  The tight destination-pitch provided by the patented EuroSort tray design coupled with the EuroSort Flex-Drive System allowed for a much more compact layout allowing it to easily fit into a corner of the existing mezzanine, rather than having the sorter run the full length of the mezzanine.

“To build for Easter Sunday, or not?”  This is the age-old questions that e-commerce FC executives have been asking themselves.  If they build a FC specifically for the peak season, much of that automation will remain underutilized through the other 75% of the year.  And if they don’t build with peak season in mind, they’ll have to rely on a significant amount of manual labor to contend with the rush.

The EuroSort Bomb Bay Sorter allows for a third option: design a sorter with enough raw capacity for the peak season, but with the flexibility to adjust the staffing to meet fluctuating demand.  This is made possible by the unique Bomb Bay Tray design that results in higher capacities at slower speeds (17,280 trays/hr at 1.2 mps).  Unlike with similar technologies, the EuroSort Bomb Bay presents an easy and comfortable speed that allows for manual induction, eliminating the need for costly auto-inductions and the increased maintenance that comes along with them. 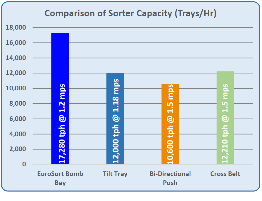 This unique benefit was put to use by one of the nation’s largest apparel retailers when they implemented their Direct to Consumer (DTC) operation.    The Bomb Bay Sorter was designed with 2 induction areas, each capable of 17,280 trays/hr.  During non-peak months, each induction area is staffed with an average of 6 people (12 total), and process close to 20,000 units per hour (260,000+ per day) without the need to pre-sort to each induction area.  As peak season hits, temp labor is used to increase staffing to 10 people per induction area (20 total) and items are pre-sorted to each induction area.  This simple adjustment allows them to process close to 30,000 units per hour.  In 2016, their record day saw them process 460,000+ units in just 2 shifts.

The other technology this company considered would have required costly auto-induction, with half of the automation lying dormant for much of the year. By utilizing a manual induction and staffing as necessary, maintenance costs are lower, the footprint is smaller, the variety of sortable product increases, and the initial investment is significantly lower.

“Doing more with less” – A mantra we’re all too familiar with.  Virtually every business is faced with this challenge, and for the growing e-commerce fulfillment center doing more with less means investing in automation that is as flexible as your business demands.  It means unlocking your existing infrastructure to find news avenues for ROI and revenue.

The EuroSort Bomb Bay Sorter has been proven to do both.

Take the example of a book retailer headquartered in the Mid-West.   They originally invested in a EuroSort Bomb Bay Sorter to sort inbound books with like-titles.  After several months of successfully using the sorter as intended, the FC executives realized that the sorter could also be used to sort outbound orders for their new and growing e-commerce channel.  A sorter originally designed to handle just books was now sorting everything from bookmarks and pencils, to backpacks and board games.   This unexpected secondary utilization of their existing infrastructure resulted in an accelerated ROI from a planned 24-month period to just over 12-months.  Had they selected a different technology, many of these non-book items would not be “sortable”.  Thanks to the unique design of the EuroSort Bomb Bay Sorter, even non-conveyable items will sort with ease.

Yet another clear example of doing more with less can be found at the new FC of a familiar Sports-Apparel Online Retailer.  For their new West Coast FC, both a unit sorter and shipping sorter would be needed.  The unit sorter would sort the units that makeup each order, and the shipping sorter would sort the bagged and boxed orders to the correct outbound carrier-lane.    Traditionally, two separate sorter technologies would be utilized for the two different processes.  However, the inherent flexibility of the EuroSort Bomb Bay allowed for one sorter to accommodate both processes.  The Bomb Bay Tray selected had the ability to sort everything from small items like stickers and decals to large items such as shipping cartons.  The benefits of this approach were two-fold: 1) approximately 2,000 SQFT reduction in floor space required, and 2) approximately 35% reduction in initial investment. The result was one system that is used for both order-fulfillment & shipping in which the freight savings alone generated an ROI in less than 12 months.

As previously mentioned, shipping costs and fulfillment speed are a major influencer for 80% for e-commerce customers as they shop around1.   Furthermore, data has shown that 66% of online shoppers have abandoned their cart due to shipping costs3.

Couple this data with the data that shows 23% of returned orders are due to the customer having received the wrong item2, it’s clear that fulfillment center performance is as closely linked to customer acquisition and retention as is the quality of the product itself (and in some cases, more so).

However, this form of cost savings, or rather lost-revenue-avoidance, is often overlooked or seen as icing on the cake.  This was just the case for a well-known neighborhood Drug Store at their Direct to Consumer Rx Facility in the Mid-West.  While having justified the EuroSort Bomb Bay Sorter with ROI from labor savings alone, more savings came through in other ways.  By pre-sorting the DTC Pharmaceutical Orders down to the postal-code level, a strategy known as zone-skipping4, this Fortune 500 company was now able to deliver to their customers several days quicker than before, and at a lower cost.  This led to a measurable improvement in customer retention in an industry where the customer has more options than ever before.

A FLEXIBLE SORTATION SOLUTION – THE KEY TO E-COMMERCE PROFITABILITY

The e-commerce fulfillment center plays an integral role in the success of these growing companies, and no other single piece of automation can open the doors to so many cost savings than a flexible sortation solution.  To maximize these savings, it is vital that a sorter that taps into as many of these savings as possible.  Infrastructure savings, labor savings, operational flexibility, the ability to do more with less or more with what you have, and the ability to attract more clients and keep the ones you have.  The EuroSort Bomb Bay Sorter has proven to achieve all this and more.

As a recognized leader of state-of-the-art technology in Bomb Bay, Push Tray, and Sweeper Sorters, EuroSort encourages customers worldwide to challenge them with their issues, needs and projects.  Our engineers are up for the challenge.   Please contact EuroSort via our website (www.eurosort.com) or by phone (410-642-5615)