We use cookies to provide you with a better experience. By continuing to browse the site you are agreeing to our use of cookies in accordance with our Cookie Policy.
Home » Weekly load volumes decline in four cities hit hardest by Covid-19

Analysis of Covid-19-related shipping patterns is showing a return to more historic levels across the supply chain, especially in the four hardest-hit U.S. cities, according to data released Friday by supply chain technology company FourKites.

FourKites evaluated shipping patterns in New York City, San Francisco, New Orleans, and Detroit and found weekly load volume declines across consumer packaged goods, food and beverage, and paper and packaging industries in late March that stood in stark contrast to the 29% increase in volume in the same sectors between February and March. FourKites tracked declines for the weeks of March 23 and March 30, respectively, as follows:

“Our city-level data is in line with trends we’ve seen across all global shipments. Across all loads, there was an aggregate 6% decrease in load volume the week of March 30 compared to the previous week, with CPG load volume dropping by 2%; F&B loads dropping 9%; and paper and packaging loads dropping 6%,” Vivek Vaid, chief technology officer for FourKites, wrote in an April 10 blog post. “This is in contrast to the 29% increase in volume observed from February to March for those very same sectors–an uptick that reflected the added demands put on the supply chain during the early weeks of the nation’s Covid-19 response.” 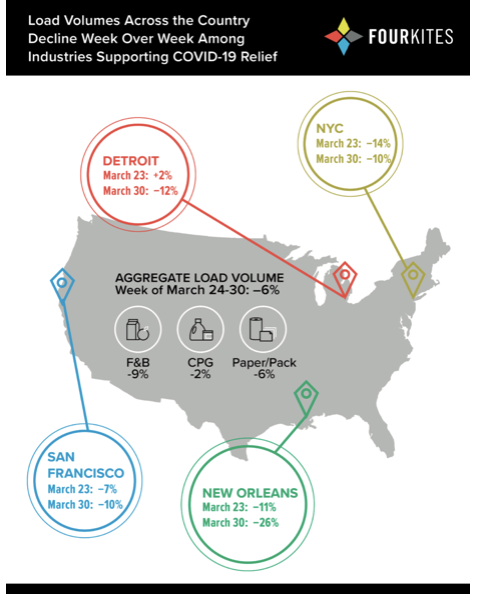 The analysis also revealed disruption at the facility level, as supply chains scrambled to react to the sharp market changes.

“Although warehouses can typically stretch to 110% of normal capacity with limited negative impact, they are now being stretched significantly more,” Vaid also wrote. “That translates into more product to pick up, more potential for manufacturing delays, and more trucks in the queue to process.”

FourKites analyzes data from millions of loads and real-time machine learning to help shippers and carriers optimize their assets and inventory movements, according to the company.