We use cookies to provide you with a better experience. By continuing to browse the site you are agreeing to our use of cookies in accordance with our Cookie Policy.
Home » Logistics economy expanded in September

Economic activity in the logistics industry expanded in September, but continued a moderating pace that began in April, according to the latest Logistics Managers’ Index (LMI) report, released Tuesday. The slower pace of the past six months follows a year-and-a-half of record-high growth levels fueled by pandemic-driven demand for logistics services.

The September LMI registered 61.4, up 1.7 points compared to August, but well below its all-time high reading of 76.2 in March. An LMI score above 50 indicates expansion across the industry, and a reading below 50 indicates contraction. A reading above 70 indicates considerable growth, according to LMI researchers.

The LMI report is based on a monthly survey of North American logistics industry professionals.

Although slower, industry growth is being fueled by high levels of inventory and the associated costs of holding it. Inventory levels rose more than four points in September to a reading of 71.9, continuing a trend that has held throughout 2022 and stems from late-arriving goods, a shift in consumer spending toward services, and high inflation levels. The glut of inventory and a lack of warehouse space is driving up costs, as the LMI’s inventory costs index remained high at 77.2 in September.

In September, warehousing prices rose slightly to a reading of 75.4 and warehousing utilization reached 76.8, up more than 11 points from August and the second-highest reading in the history of the index. Rogers said the numbers reflect companies' desire to anticipate demand, especially as peak holiday shipping season gets underway.

The warehousing metrics stand in contrast to transportation measures, which continued to loosen in September. Transportation capacity neared a record high and transportation prices continued their steady decline from March, hitting a two-year low. At the same time, transportation utilization grew in September–meaning that companies are using what is already available to them, perhaps in an effort to cut costs by combining loads as much as possible, according to Rogers. 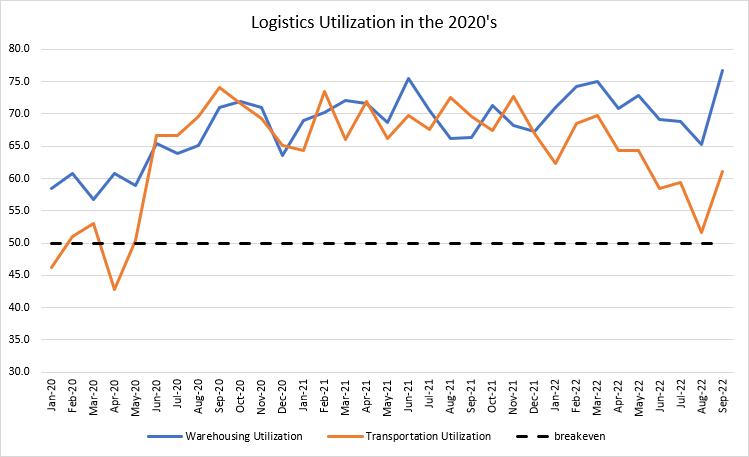 “Everyone is trying to cut costs … but also, businesses learned lessons during the pandemic–especially due to the tightness in the supply chain of the past couple of years,” Rogers said. “Now, they want to be as efficient as possible.”

Looking ahead, survey respondents said they expect the pace of industry growth will continue to moderate, predicting overall growth rates in the 50s over the next 12 months. That’s a sentiment Rogers said should be expected following the red hot industry expansion of the past two years.

“We were driving 200 miles per hour on the highway–that’s not sustainable,” he said. “You have to slow down and get back to normal. And that’s what we’re seeing.”

The LMI tracks logistics industry growth overall and across eight areas: inventory levels and costs; warehousing capacity, utilization, and prices; and transportation capacity, utilization, and prices. The report is released monthly by researchers from Arizona State University, Colorado State University, Rochester Institute of Technology, Rutgers University, and the University of Nevada, Reno, in conjunction with the Council of Supply Chain Management Professionals (CSCMP). Visit the LMI web page for information on participating in the monthly survey.

Q1 Outlook: Carriers will continue to compete for limited demand

DCV-TV 4: Viewer Contributed
What is the "smart" way to source your transportation and why is it so important? Because the carriers are smart and they will provide better rates and service when things are done the right way versus the "wrong" way. In short, from a carrier's perspective sourcing events are a clear indication whether a shipper...