Recent postal reforms will go a long way toward putting the U.S. Postal Service back on a sound financial footing, says Kevin Yoder, head of the postal advocacy group Keep US Posted. But there’s more to be done to keep the Postal Service healthy.

Kevin Yoder is a former congressman who now serves as executive director of Keep US Posted, a broad-based advocacy group that believes that a reliable, affordable U.S. Postal Service (USPS) is essential to our way of life and should be protected.

From 2011 to 2019, Yoder served his Kansas district in the House of Representatives and was the youngest Republican appointed to the House Appropriations Committee. He also chaired the Homeland Security and Legislative Branch subcommittees and served on various other committees, including the House Steering Committee. He was deputy whip for the House GOP and vice chairman of the National Republican Congressional Committee.

Yoder has an undergraduate degree in political science and English as well as a J.D. from the University of Kansas. He recently was a guest on DC Velocity's Logistics Matters podcast, where he spoke with Group Editorial Director David Maloney about postal reform. 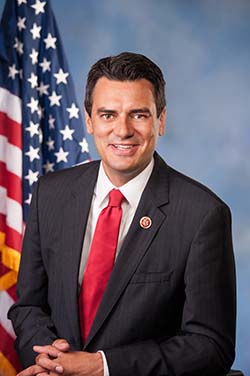 Q: What is the role of your organization, Keep US Posted?

A: Keep US Posted is a new organization that we created last year out of concern among Americans—both folks in business and industry and ordinary citizens—that Congress wasn’t paying enough attention to Postal Service issues.

For a long time, Congress has been putting off dealing with the issue of postal reform, which has led to problems with the budget and operations of the Postal Service. We know the Postal Service is one of America’s most trusted institutions. It has been around since the country’s beginnings—the Constitution even states that Congress has a responsibility to manage and maintain the Postal Service. So, it is a critical service that delivers to 161 million addresses daily, and it is the only carrier that is required to deliver to every address no matter how remote and how rural.

We saw a disconnect between what we think Americans value and expect, which is a well-funded, efficient Postal Service that delivers on time and keeps cost down, and what Congress was actually doing. So, we started Keep US Posted to give those Americans who care so deeply about the Postal Service a way to have their voices heard in the halls of Congress.

Q: Congress recently passed the long-awaited Postal Service Reform Act with very high bipartisan support: The vote was 79–19 in the Senate and 342–92 in the House. As a former congressman, does that surprise you given the current political climate in Washington?

A: Well, it does, but it probably shouldn’t—and that is because this is an issue that affects every district in the country. The issue of postal reform has been simmering below the surface in Congress for a long time. When it finally did hit the floor, you saw majorities from both political parties voting for the bill. The last time a Postal Service reform bill passed Congress was in 2006, so it took 16 years to get this done.

I think part of the success was due to the intensified focus on the Postal Service in the last few years. The other part of this was that it just came at the right time. Congress, as you recall, had been working on the Build Back Better bill and a number of different measures without much success. I think that Congress was looking for something that it could herald as a bipartisan achievement. So, up pops the Postal Service Reform bill at the right time, and the House passed it really easily. We didn’t know how long the Senate might sit on it, but I think majority leader [Chuck] Schumer was looking for something to show that Congress was still working while members were stuck on other issues. So, it all came together at the right moment.

Q: I know the legislation repeals the mandate requiring the prefunding of retirees’ health benefits. Can you explain how the bill changes the financing equation and talk a bit about other significant parts of the legislation?

A: First of all, the prefunding issues are very significant issues. The 2006 postal bill required the Postal Service to prefund its retirees’ health benefits 75 years in advance. No other federal agency or entity in this country has that sort of heavy burden, and the USPS simply wasn’t able to make those budget numbers work. So, getting that off the books was a huge win.

The second thing the new reform bill will accomplish is to move the retirees into Medicare as opposed to a separate health-care system. Those retirees have paid into Medicare all of their lives anyway, so taking that off the Postal Service’s books lifted another huge burden.

Then there are some other significant issues related to service responsibilities such as six-day delivery. There have been efforts in recent years to cut deliveries to five days a week, but the new measure maintains current service levels.

It also requires that mail and packages continue to be integrated. There have been some efforts from outside carriers to push the Postal Service to change that integration.

So, what you see here is a series of reforms that take some very significant burdens off the books and create some internal efficiencies by moving mail and packages together.

Q: How long will it be before we begin to see some of these reforms enacted?

A: Well, we should immediately be able to take some of these burdens off the books, and the Board of Governors of the Postal Service ought to have much more clarity on their budget. I will tell you, some of the concerns we have going forward are how Americans will view the Postal Service once it starts to turn a profit and move into the black.

Postmaster [Louis] DeJoy last year rolled out a 10-year plan in which the USPS is projected to raise postal rates significantly—putting through higher percentage increases than we’ve ever seen before. It has also begun to ratchet down the delivery times for mail, so a first-class piece of mail used to be “on time” if it was delivered in one to three days. Now, that is five days, so we are seeing services reduced and we are seeing costs go up.

Our big concern and our hope is that the benefits and savings resulting from these reforms will be passed on to the American people by keeping rates down and improving service. If we don’t see that, then I think a lot of members of Congress and others will be frustrated that we pushed through all those reforms but they didn’t lead to benefits that were tangible to the American people.

Q: Those rates are still low compared with a lot of other countries and, of course, the Postal Service was set up to deliver letters and business correspondence, much of which has now shifted to email. So, you have a model that is basically built on a service that people aren’t using anymore. That has forced the Postal Service to move more toward a parcel and package delivery model. How has that shift affected what we are seeing with the reforms?

A: Well, certainly the Postal Service has to continue to move with the times, but I think one of the things we saw, particularly during Covid, is how much the American people still rely on the Postal Service for their daily needs—whether it’s correspondence like cards and letters, financial documents, or medicine. We saw a lot of discussion about election ballots being moved via the mail, and more recently, the Covid-19 tests were all sent through the mail.

We know that this is something that Americans still view as a critical service, and revenue was actually up during Covid. We see more mail moving and people making more use of the Postal Service. We think that the Postal Service ought to build on that success, and that, rather than be defeatist and say that people just don’t send mail anymore, we should continue to try to make the Postal Service relevant to the American people’s lives.

However, what we are seeing are projections showing mail declining by 42% over the next 10 years. We think that is partly because of rates going up to historic levels. We’re concerned that rising rates together with reduced service levels will mean that the American people see less value in using the mail and may turn to other methods.

Getting postal reform passed is certainly important, and it helps us reshuffle the deck here, but to keep the Postal Service strong and relevant in the minds of the American people, additional reforms will have to be enacted. So, we have a lot of work to do.

Q: What will your organization, Keep US Posted, do to work toward that?

So, we are working toward making sure that the USPS continues to be a strong, well-run entity and that it delivers under budget and on time for the American people each and every day.