We use cookies to provide you with a better experience. By continuing to browse the site you are agreeing to our use of cookies in accordance with our Cookie Policy.
Home » Logistics economy grew in February

The logistics economy continued its strong rate of expansion in February, fueled by demand for warehousing and transportation services, rising prices, and high inventory levels. The industry saw its 13th straight month of “significant growth” according to researchers for the monthly Logistics Manager’s Index (LMI) report, released today.

The LMI rose 3.3 points from January to a reading of 75.2, the second highest reading in the index’s six-year history and well above the 50-point mark indicating expansion across the industry. The logistics economy in February was characterized by unseasonably high inventory levels, continued capacity constraint across transportation and warehousing markets, and higher costs throughout the supply chain.

“Like January, this month’s growth is driven by rapid growth in inventory levels, which are up 9.1 points to 80.2—crossing the 80.0 threshold for the first time and shattering the previous record of 72.6,” the LMI researchers wrote. “This is a complete 180 from the Fall of 2021, when firms struggled to build up inventories. Now it seems that a combination of over-ordering to avoid shortages, late-arriving goods due to supply chain congestion, and a softening of consumer spending has created a logjam.” 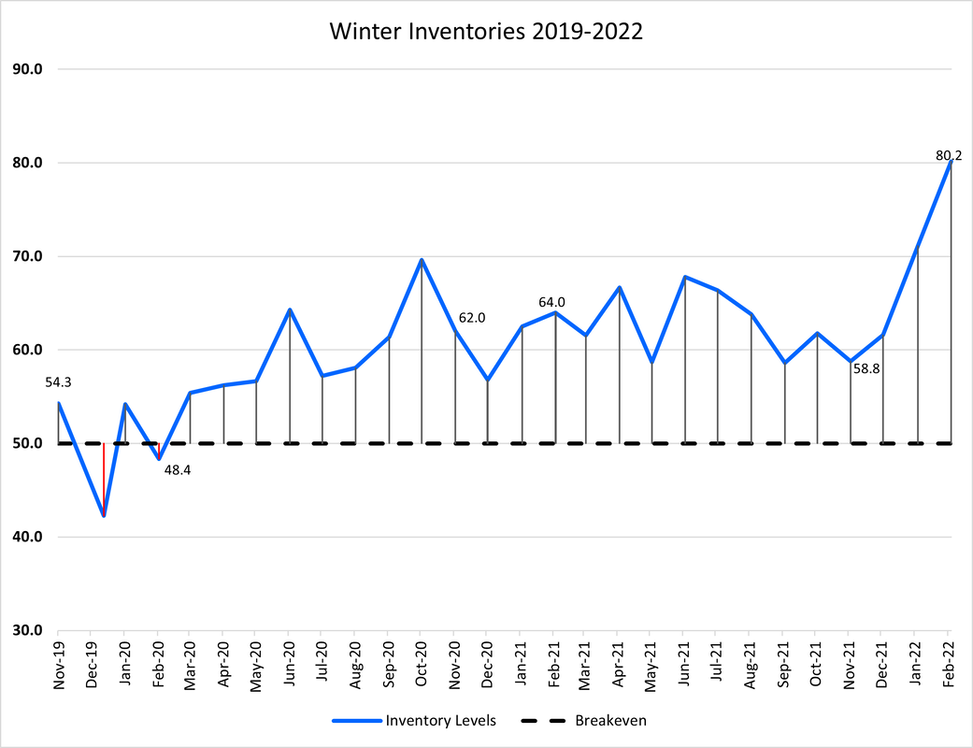 Geopolitical issues are compounding the problem, most notably Russia’s invasion of Ukraine, which is accelerating already high fuel prices and creating supply chain delays as carriers re-route air cargo between Europe and Asia due to airspace closures in the region, the researchers also said. Slowdowns at the U.S./Canada border due to protests across Canada were also a factor during the month, pushing up prices to ship goods, they said.

Logistics managers surveyed for the February report said they expect current conditions to hold. The LMI’s Future Conditions Index came in at a reading of 70, down slightly from January, but still indicating expansion over the next 12 months. Logistics managers said they expect capacity to remain tight, especially in warehousing, and industry costs and prices to remain high.

Publications & Associations Supply Chain Strategy
KEYWORDS LMI - Logistics Managers' Index
Victoria Kickham, an editor at large for Supply Chain Quarterly, started her career as a newspaper reporter in the Boston area before moving into B2B journalism. She has covered manufacturing, distribution and supply chain issues for a variety of publications in the industrial and electronics sectors, and now writes about everything from forklift batteries to omnichannel business trends for Supply Chain Quarterly's sister publication, DC Velocity.