We use cookies to provide you with a better experience. By continuing to browse the site you are agreeing to our use of cookies in accordance with our Cookie Policy.
Home » Leading with technology for fast fulfillment
Picking Technologies

Leading with technology for fast fulfillment

Online grocery service shows what it takes to build a fully automated robotic fulfillment system from the ground up—and become a technology-driven company in the process.

Leaders at online grocery company Home Delivery Service (HDS) say they are ready to reveal an e-fulfillment system that will change the way food delivery is done, rivaling the likes of Amazon and Wal-Mart, and taking advantage of the growing popularity of online grocery shopping, especially in the last year. The concept has been in the works for nearly 10 years, driven by the need to get the technology behind it just right before attempting to deliver a single item. Later this spring, HDS plans to launch a full-scale pilot of its fully automated, robotic, touchless warehouse fulfillment system, bringing the company one step closer to its goal.

“In order for us to not just be another [dotcom] copycat, we have to have something of a moat for our business. Something that [makes us] highly efficient and very profitable,” explains Aravind Durai, HDS’s vice president of automation and a founding member of the company. “The moat we have decided on is our own design and build of the e-fulfillment technology. We believe the efficiency gains and cost savings we will achieve and the service level we can deliver to customers [are] built upon the framework of [our technology].”

The technology is called RoboFS. Driven by robotics and packed into a smaller footprint than most online fulfillment systems occupy, RoboFS will allow HDS to operate “lights out” fulfillment centers (FCs) across the country, where orders are untouched by human hands until they arrive at the customer’s doorstep, company leaders claim. The system has inspired the confidence of a handful of investors, one of which is IT products distributor Ingram Micro, which will pilot and host full-scale demos of the system at its 500,000-square-foot omnichannel fulfillment center in Plainfield, Indiana. The journey to get to that point offers a glimpse at the work involved in building a fulfillment system from the ground up—and proof that automation is reshaping the way work gets done in warehouses and distribution centers everywhere.

HDS is the brainchild of Louis Borders, co-founder of Borders Bookstores and founder of the now-defunct dotcom-era online grocery business Webvan. As Durai explains, Borders was an early leader in supply chain automation, and he founded HDS to provide a fast, personalized online shopping experience for a wide range of goods. The company will be rooted in grocery but will also include access to other products that can be purchased within the same order—like shopping at an online mall. 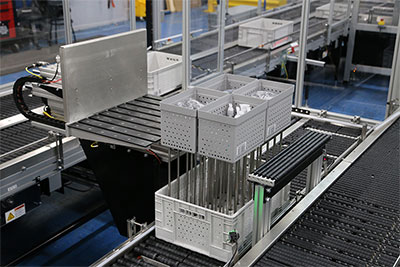 Enlarge
Pallets and cases are broken up in the receiving area, and products are put into as many as eight separate bins within each tray. Using an automated storage and retrieval system (AS/RS), the trays are stored in high-bay racks and removed as needed for picking.

Although the concept may sound familiar, Durai insists it’s different from the Amazon or Walmart approach to online shopping—primarily because HDS is leading with fresh grocery delivery and offering access to other branded merchandise as an add-on. Its primary competition is not Amazon, but your local grocery store, Durai explains.

The company’s business model calls for the establishment of small, highly automated fulfillment centers in urban and suburban markets. At 150,000 square feet, the FCs will be larger than the microfulfillment centers many supermarket chains are developing but considerably smaller than a typical Amazon DC. And there will be no retail outlets. HDS will store roughly 100,000 fast-moving stock-keeping units (SKUs), including chilled, frozen, and ambient-temperature items, for same-day or “express” one-hour delivery. Add-on items will be filled as part of the customer’s next order, via one- or two-day delivery. So your groceries arrive first; your new sneakers a couple of days later.

Creating a fulfillment system to accommodate that plan turned out to be a bigger challenge than Durai and his colleagues expected—and the exercise ended up turning the tide in the company’s mission.

“This is a tough nut to crack,” Durai says of coordinating fast fulfillment and last-mile delivery of perishable items. “When you combine it all, it’s a challenging problem to solve.”

After researching the systems and equipment required for the job, he says, the company “came away with the realization that the product we wanted does not exist. We had to make instead of buy.”

Durai and his colleagues ended up engineering a system from the ground up—and becoming a technology company in the process.

PUTTING THE BUILDING BLOCKS IN PLACE

The fulfillment system Durai and his colleagues have built uses robotics and advanced proprietary software to create a just-in-time fulfillment system that keeps throughput running smoothly. An artificial intelligence (AI)-based warehouse management system (WMS) coordinates the movement of mobile and articulated robots (the latter used for picking) and smart conveyors to create the lights-out fulfillment process, which encompasses everything except receiving and shipping dock activities.

The system uses standardized transport trays to move items throughout the facility. Pallets and cases are broken up in the receiving area, and products are put into as many as eight separate bins within each tray. Using an automated storage and retrieval system (AS/RS), the trays are stored in high-bay racks and removed as needed for picking. Autonomous articulated robotic arms pick products from the trays to fill orders. The breakdown of pallets and cases is the only manual part of the fulfillment process, according to leaders at Indiana-based material handling equipment manufacturer Shuttleworth, which designed the AS/RS and tray-movement system. Once products are placed into the AS/RS, they aren’t touched by human hands until the consumer opens the HDS reusable delivery tote to remove them.

“When a pallet of goods comes in, we break it down into storable or pickable levels and then feed the storage area or the robotic pick area,” explains Ken Tinnell, vice president and general manager of Shuttleworth, adding that the development of the entire project has been purposefully slow. “They [Louis Borders and his colleagues] pulled together a vision of the company and have very patiently been moving this forward. In that timeframe, we’ve engineered a little, shown a little, and grown and gathered momentum over time.” 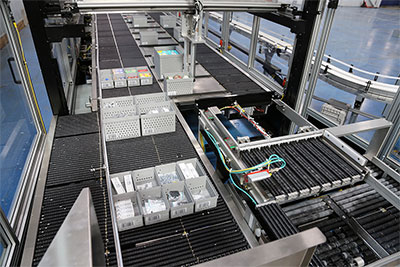 Enlarge
The RoboFS uses standardized trays to move items throughout the facility. Pallet and case breakdown is the only manual part of the fulfillment process, according the manufacturer, Shuttleworth.

The RoboFS demo will go live later this spring at the Ingram Micro facility, with plans to showcase the technology for a wider audience. Ingram Micro is one of a few initial investors in the system, and the company will have exclusive rights to use RoboFS—specifically for its IT, mobile device, and connected-device distribution business and logistics services, according to Eric Schelm, Ingram Micro’s director of business initiatives.

Durai explains that HDS plans to sell the RoboFS fulfillment service to companies in noncompeting industries—anyone in the grocery industry is excluded—and that it won’t sell it to any of those companies’ competitors for 10 years. Early investors like Ingram Micro have ponied up millions to get in on the technology. HDS had raised about $38 million to develop the system as of this spring, Durai says.

“[Our] technology is being built to service the grocery e-commerce [business], but in the process of developing it, we have talked to many other people about it [because] supply chain fulfillment is a problem that vexes everyone,” Durai explains.

Although it’s been a long time coming, the Ingram Micro pilot project is finally ready to go. As for HDS’s own e-commerce grocery business, the company says it plans a full-production launch sometime in 2022. Right now, it adds, the focus remains on testing and demonstrating the fulfillment technology.

“It’s ready, it’s working, it’s real,” Tinnell says, again emphasizing the long steady road the partners have traveled to get to this point. “Some companies that I work with rush through the design—because they have to, to get to market. They have to react to market pressures. Because this [project] has taken a longer time, this design has been seasoned over the course of several years … As a result, it’s going to market a whole lot better than any other, similar type of project I’ve seen in my career.”

State of the Industry: Oil & Inflation

DCV-TV 4: Viewer Contributed
In this third of a four-part series, Greg Orr speaks to oil’s surprisingly far-reaching impacts on inflation. A year’s worth of persistently high inflation has taken its toll on trucking operators, particularly those in the irregular route, long-haul full truckload segment. Over the past year, fleet operators have...