We use cookies to provide you with a better experience. By continuing to browse the site you are agreeing to our use of cookies in accordance with our Cookie Policy.
Home » IoT goes: 5G, whiz
INTERNET OF THINGS

The advent of 5G wireless networks could pave the way for a supercharged internet of things (IoT), transforming the way logistics operations monitor equipment, track inventory, and even train employees.

The IoT (internet of things) is a fairly new item in the logistics toolbox, but technology experts across the industry say it’s about to get a major upgrade, thanks to the national rollout of fifth-generation (5G) wireless networks.

Supply chains have relied on IoT technology for several years, using its collection of distributed sensors to monitor variables like open dock doors at a DC, the speed of conveyor belts in a fulfillment center, and the location of trailers in a yard. Those applications have proved the technology’s business case, demonstrating the IoT’s value in connecting physical supply chain assets to the digital web.

Now, that standard is about to change, thanks to the advent of a new generation of 5G technology that can support an expanded array of sensors and other devices. Taken together, those advances are set to enable a variety of innovative IoT applications, opening the door to the remote monitoring of conveyors and forklifts for maintenance purposes, inventory tracking via door sensors and security cameras, and real-time feedback for coaching employees.

The 5G era is already upon us. Network providers like AT&T and Verizon now support 5G coverage in major U.S. cities, and electronics companies like Apple Inc. are incorporating 5G chips into their latest mobile devices. Providers of machines, assets, vehicles, and sensors can now build on that foundation.

GET READY FOR A NEW GENERATION

Most of the current generation of wireless IoT devices rely on the same fourth-generation (4G) networks that people use for their legacy smartphones. Also referred to as the “long-term evolution (LTE) mobile communications standard,” 4G wireless broadband technology was designed to support consumers’ relentless demands for increased data, more bandwidth, and lower latency (lag times), according to Luke McLeroy, senior vice president for business development with Avanci, a Dallas-based wireless technology licensing firm.

However, when engineers began planning for an improved 5G network, they quickly realized that their vision of expanding IoT capabilities to literally millions of devices—also known as Industry 4.0 or the “industrial internet of things” (IIoT)—carried with it very different demands, McLeroy says. For instance, in order to support the IIoT, 5G would have to offer more than just, say, blazing fast download speeds; it would also have to offer such enhancements as extended range from base stations and low power requirements, according to McLeroy.

Those enhancements will likely lead to an explosion of IoT devices that can soon be attached to a wide array of platforms. The industry goal is to have each IoT device run off its own battery for 10 years and stay connected via a constant barrage of tiny pings of data—such as a check-ins, location updates, and alerts.

“Where maybe you used RFID (radio-frequency identification) before and pallets would pass signal collectors spaced every so far apart, now you’ll use the cellular network,” McLeroy says. “So instead of saying ‘A device has passed this RFID gate but not that one, so it must be somewhere in between,’ now you can say, ‘That pallet or that trailer is exactly here on the map.’” 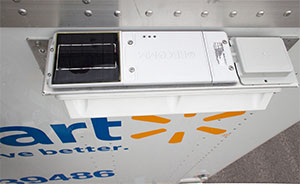 That coverage will not stop at the factory door, loading dock, or delivery site, but rather extend to every U.S. interstate highway and distribution center that a truck would typically visit, McLeroy says. In most cases, the signals will travel over the same AT&T or Verizon wireless networks used by consumers, but large companies could choose to build private 5G networks within their own manufacturing or logistics facilities to provide better data security. “Once the logistics industry learns … how this network works, they’ll think of many new ways to use it,” McLeroy predicts.

That vision of broad IoT coverage will be supported by 5G networks using LPWA (low power, wide area) technology, based on the LTE-M and NB-IoT wireless standards, which combine to prioritize battery longevity over sheer speed, according to the French information technology (IT) provider Thales Group. A related standard is the LoRaWAN specification, which is designed to support large IoT networks through requirements like bidirectional communication, end-to-end security, mobility, and localization services, according to Senet, a New Hampshire-based IoT connectivity provider.

In addition to their low cost, long life, and reliable connectivity, the next wave of IoT devices will also be smart, according to Ashish Chona, senior vice president of IoT business for Orbcomm, a New Jersey-based provider of IIoT systems. Instead of simply collecting data and passing it off to a cloud site for processing, “smart” IoT devices can analyze some of their own data—also known as edge computing.

Along with saving the time and energy that would be needed to communicate with a cloud-based “data lake,” edge computing can also help IoT users handle the torrents of data collected by sensors enabled with 5G designs, Chona says. As IoT sensors become ubiquitous, the data generated will expand exponentially. If an IoT network can’t process the data promptly, it will be only part of a full solution, he explains.

“The edge is important because it adds smarts,” Chona says. “That’s what the market is demanding: You need to know where your asset is so you can predict with ease when it will arrive.”

Applied to the commercial transportation sector, smart IoT sensors and edge computing combined with 5G technology can also improve truck drivers’ efficiency, regulatory compliance, and safety, according to Chona. With near real-time processing, those sensors can improve the performance of devices like in-cab cameras, enable “speed by street” monitoring of hyper-local speed limits for driver-training purposes, or monitor variables like tire pressure to enhance vehicle safety, he says. Many of these features can drop out of connectivity with 4G networks but would be far more reliable with 5G.

From warehouse docks to interstate highways to local drop-off points, logistics operations are on the verge of being disrupted by a sudden jump in the capability of the IoT. Supercharged by high-speed, low-energy 5G wireless networks, future IoT sensors could provide unprecedented levels of freight visibility, inventory-tracking precision, and cargo-monitoring capabilities.