We use cookies to provide you with a better experience. By continuing to browse the site you are agreeing to our use of cookies in accordance with our Cookie Policy.
Home » For U.S. truckers, more speed bumps ahead
Transportation

The U.S. trucking sector idled along in 2019 absorbing generally flat to declining volumes, a slowing industrial economy, and an uptick in carrier bankruptcies. As the industry rolls into 2020, demand remains relatively soft, there are still too many trucks chasing too little freight, and the pricing pendulum has swung back in the shipper's favor. Add to that new regulatory mandates, higher operating costs, and a stubborn shortage of qualified drivers, and truckers in 2020 will have to overcome some serious bumps in the road to success—and profits.

"It's going to be a tough first half of the year" for both less-than-truckload (LTL) and truckload operators, says Bob Costello, senior vice president and chief economist with the American Trucking Associations (ATA). "No matter how you look at volumes, they've slowed," he notes, adding that there is "simply too much capacity out there." Couple that with higher driver pay scales, skyrocketing insurance premiums, and increases in virtually every other operating-cost area, and 2020 promises to give fleets all they can handle, Costello says.

Jim Fields, chief operating officer for Pittsburgh, Pennsylvania-based LTL truck line Pitt Ohio, doesn't expect to see much in the way of tailwinds that will help push carriers along in 2020. All of which means "we will need to create a better working environment in which to be successful," he says.

His areas of focus are driving productivity and creating more efficiencies in Pitt Ohio's processes, better utilization of equipment by type and size, optimizing the network, and making sure Pitt Ohio has the right book of business. Fields also emphasizes staying close to customers and using technology more strategically "to make it more efficient for customers to see [and utilize] data we push to them, rather than to call us multiple times a day." It's about driving a value proposition that resonates with shippers and meeting needs for fast, reliable service that helps them shave cost from their supply chains. Some 90% of Pitt Ohio's shipments are delivered overnight.

Overarching geopolitical concerns and a weak global manufacturing sector signal some continued risk, yet progress with China trade negotiations and the ratification and signing of the new USMCA (United States-Mexico-Canada Agreement) trade pact offer potential upside. "If inventories rebalance in the first half of 2020, ... shipment volumes will stabilize and benefit from what could be a better growth environment," Hawkins says. He adds that the YRCW carriers will continue to implement their fleet upgrade plan in 2020. Since 2015, the company has put into service "well over 5,000 new tractors and 12,000 trailers," he reports.

THE REALITY OF TRUCKING IN 2020—A MIXED BAG

The general sense that the market is soft and any meaningful uptick in freight volumes won't occur until the second half of the year is shared by a number of industry analysts as well.

"The economy in general is a mixed bag," notes Avery Vise, vice president of trucking for FTR Transportation Intelligence, a Bloomington, Indiana-based research firm. His research projects overall growth in freight volumes of less than 1% in 2020. In terms of hurdles to overcome, he cites the outbreak of the coronavirus in China as a "shock to the [global trade] system" as well as continuing pockets of weakness in industrial manufacturing and durable-goods orders.

Presenting at a recent industry conference, Vise outlined five themes he describes as "the reality of trucking" in 2020:

Not all industry players see a year of dark clouds on the horizon. Marty Freeman, executive vice president and chief operating officer of Thomasville, North Carolina-based Old Dominion Freight Line (ODFL), is "very optimistic" about 2020, citing the ratification of the USMCA pact, a partial trade agreement with China, and employment holding steady.

"We talk to our customers every day and ask them the same question [about the outlook for 2020]. We get [answers] anywhere from flat to 5% to 6% growth," he says. Shippers, in ongoing efforts to manage costs, also continue to seek providers who can service multiple supply chain needs under one roof, a "one-stop shop," notes Freeman. "That helps us become stickier with customers" by leveraging ODFL's core LTL services with its capabilities in truckload brokerage, expedited service, household moves, international forwarding, and port drayage.

"We're not the cheapest service provider in the LTL stable," Freeman admits. "Our value prop is on-time service with low claims at a fair price." It's a strategy that has delivered the best operating ratio in the LTL business for a decade. 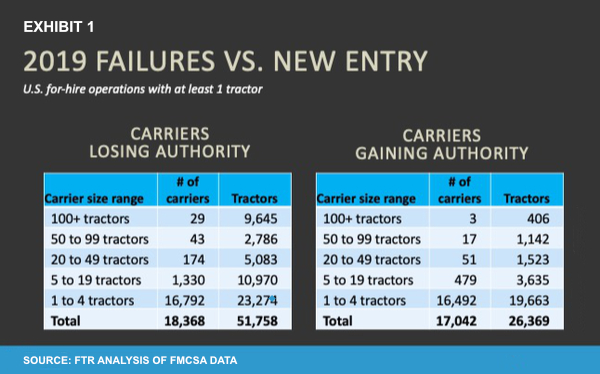 Satish Jindel, founder and president of Warrendale, Pennsylvania-based SJ Consulting Group, also is relatively optimistic. He forecasts LTL carriers, despite a soft market, securing rate increases in the 3% to 4% range, while truckload carriers can expect rate hikes from flat to 2.5%.

He cautions fleets to be prudent about truck investments, even those intended as replacements, to avoid worsening the current oversupply situation. "You have to realize that when you add trucks to replace, you are adding to overall market capacity. Used trucks do not go into a landfill," he says. "They stay on the road and go to smaller carriers who could not afford to pay the $150,000 cost of a new truck."

Jindel also suggests that LTL carriers need to get away from a mindset he calls "put down the ducky," a colorful description for a practice where operators are "too much in love with running around town with a tractor and 53-foot trailer carrying a lot of air and empty trailer space at higher cost." He points out that LTL carriers who emphasize deploying more straight trucks and tractors pulling 28-foot "pup" trailers in city operations are "some of the most profitable carriers" because they are "better at utilizing the smaller equipment."

Major new regulatory mandates that went into effect in the past 15 months also impact the industry and its prospects going forward.

The implementation of electronic logging devices and rollout of a nationwide driver drug-testing clearinghouse meant fleets in many cases had to purchase and install new ELD equipment in trucks, and update testing policies and procedures. In both cases, operating, societal, and safety benefits resulted as fleets got up to speed.

Old Dominion's Freeman notes his company started its ELD implementation in January 2019 and conducted a "full-court press" throughout the year, completing the changeover to new technology, processes, and procedures, including new tablet computers in trucks, by November. He looks for "good things" from ELDs in terms of more comprehensive and timely data on driver and truck performance, which can be utilized to improve safety and operating efficiency.

YRC Worldwide was "fully compliant with the transition from AOBRDs (automated on-board recording devices) to ELDs long before the deadline," says Hawkins, adding that the two-year window afforded by the Federal Motor Carrier Safety Administration (FMCSA) gave carriers sufficient time for a smooth transition. "Among other opportunities, we utilized peer-to-peer training with our drivers to make sure they were prepared," he says.

Hawkins notes as well the positive impact from the launch of the federal Drug and Alcohol Clearinghouse, citing it as an example of the industry working in concert with the FMCSA to advance safety. "The best way to approach safety is as an investment," Hawkins says. "The power of partnership [between government, fleets, and shippers] is ... another avenue for us to collectively advance safety."

FTR's Vise adds that in his view, the impact of the new clearinghouse (which launched on Jan. 6) on available qualified truck drivers could be significant over time. "In the past, if you failed the test, you'd just go to another carrier. Now, [that test result] goes into the clearinghouse. We didn't have the data before on how many drivers were failing the pre-employment test. The other factor [that will potentially affect driver supply] is those who know they'll test positive and just leave the business."

There's also potential for improving driver quality of life and productivity, as ELDs have equipped fleets with tools to more precisely and quickly measure detention and wait times a driver must deal with at shipper docks. "Days of giving [the shipper] two hours of free time at the dock ... should be [coming to an end]," says SJ Consulting's Jindel, adding that excessive detention by shippers is a waste that reduces the driver's earning power and inhibits productivity and utilization.

DRIVER SHORTAGE—IT'S HOW YOU DEFINE IT

A shortage of qualified truck drivers also remains high on the list of concerns for shippers and carriers alike. That's particularly true in the truckload market, where 60% annual turnover is considered a victory.

Old Dominion's strategy has been to grow its own when it comes to drivers. Since it launched its in-house driver-training program in 1988, the company has graduated 5,900 CDL (commercial driver's license)-qualified drivers from its schools, notes Freeman, adding that 55% of those graduates are still with the company today.

Donald Broughton, principal and managing partner of Clayton, Missouri-based Broughton Capital, a transportation market research and analysis firm, thinks the driver shortage suffers from a gross misconception. He says whether or not there is a shortage "depends on how you define [it]," citing three determining factors: how much you're willing to pay in wages and benefits; how stringent your requirements are for safety performance, reliability, and other employee quality criteria; and how much you're willing to invest to take care of your employees and provide good quality of life (i.e., get them home regularly).

On one end of the spectrum are the higher-compensated driving jobs with dedicated and private truckload fleets, as well as parcel carriers like UPS, where, Broughton quips, driver turnover is mostly a function of "death or retirement." In the middle is the LTL market, where the latest ATA figures peg driver turnover at about 9%. On the other end of the spectrum are the long-haul full truckload irregular-route driving jobs, where "someone is paid $45,000 a year and you get them home [maybe] every two weeks," he says, adding that in this corner of the trucking world, "you'll never get enough people."

Broughton also lauds the launch of the new Drug and Alcohol Clearinghouse as an overwhelming positive for the industry and public. "That you used to be able to fail a drug test at one company and then go to another was absurd," he says. The new clearinghouse "was long overdue" and "a commonsense mandate that makes the world safer for all of us."

Intermodal is tied up in knots. When will shippers see relief?

Is infrastructure finally going to get its due?

DCV-TV 4: Viewer Contributed
It’s getting to be that time of the year when shippers are asking us to dust off our crystal ball and offer our thoughts and predictions about what the freight markets will look like in 2022. For those of you who are super busy and want the “Cliff Notes” version, here are a few of the things we’re anticipating. To...