We use cookies to provide you with a better experience. By continuing to browse the site you are agreeing to our use of cookies in accordance with our Cookie Policy.
Home » Logistics industry growth slows in February

Growth slowed in the logistics sector in February as the Logistics Manager’s Index (LMI) slipped to the lowest level in its three-year history, according to the latest LMI report, released Tuesday.

Transportation prices and inventory levels contracted during the month, indicating a supply chain slowdown that may be linked to effects from the coronavirus outbreak, researchers said. LMI researcher Zac Rogers said a February inventory slowdown is atypical, as companies are usually still building up inventory following the holiday peak season.

“I do think we are seeing some coronavirus [effects], especially in transportation and inventory levels,” said Rogers, assistant professor of supply chain management at Colorado State University. “Inventory levels being down again, for three out of [the last] four months, seems notable to me.”

Rogers pointed to a spike in inventory levels in January that he said typically would be sustained through February. He also noted that most LMI respondents took the survey late in February, when concerns about coronavirus disruptions to the supply chain were well underway.

“[What we’re seeing in February] is interesting. Whether that’s because we don’t think we’ll be selling a lot in March or because we can’t get the inventory here [remains to be seen],” Rogers said. “Normally, we would see inventory start to pick up … and historically, we’d see a spike in April [as well]. If we keep going down in March and April, we’ll know something is going on.”

“It’s interesting that prices are going down even though we see multiple 3PLs [third-party logistics providers] closing, and capacity growing [very] slowly,” Rogers said, emphasizing a narrower than usual gap between transportation prices and capacity in recent months.“[In the] past we’ve seen a negative correlation between capacity and price; now they are pretty close. It’s one of our slowest growth rates of capacity, yet prices are still going down.”

Despite the concerns, the logistics sector remains in growth mode and respondents say they are optimistic about the future. The LMI’s future conditions index registered 63.1 in February, up from 62.8 in January. Rogers pointed to the strong consumer economy, which he said continues to prop up the slowing industrial and manufacturing side. LMI researchers tracked differences in both sectors for the first time in February and found that “downstream” logistics professionals (those in consumer-facing organizations such as retailers) and “upstream” professionals (those working for manufacturers, warehousing companies, and carriers) are, indeed, experiencing different economic effects.

“... the downstream sector seems to be growing at a slightly stronger rate than the upstream sector, registering positive inventory levels and transportation prices,” the researchers wrote in February. “This tracks with recent reports showing that consumers are the strong point of the economy relative to manufacturing and industrial output.” 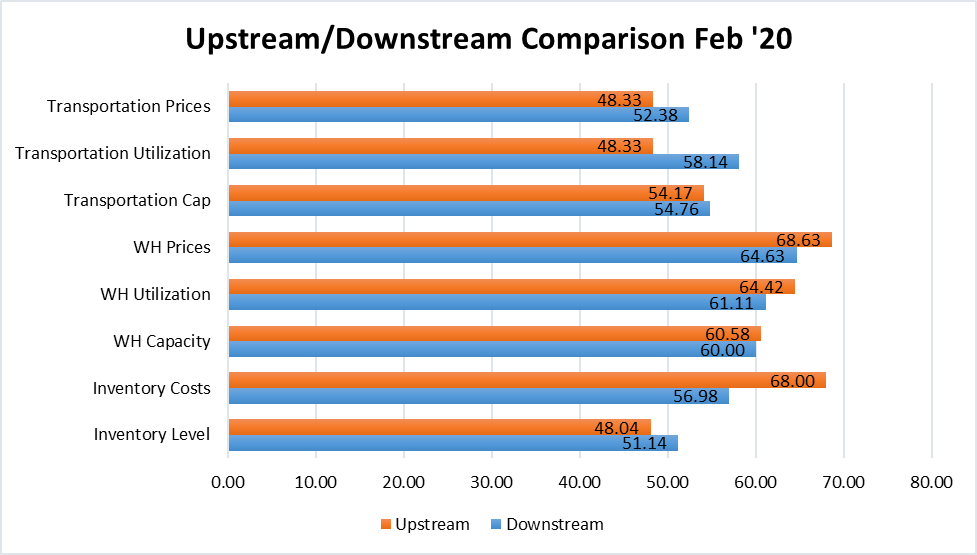 Sorting it out with automation

Struggling to maintain your automated systems?