We use cookies to provide you with a better experience. By continuing to browse the site you are agreeing to our use of cookies in accordance with our Cookie Policy.
Home » Warehouse robots earn their diplomas
Robotics and Automation

Ever since the founding of warehouse robotics pioneer Kiva Systems in 2003, observers have compared its rolling orange bots to various types of athletes and pop culture figures—hockey players, ballet dancers, Pac-Man from the world of video games, and even cartoon “Minions” from the “Despicable Me” movies.

But despite that focus on the bots’ physical prowess, many experts say the true strength of what we now call autonomous mobile robots (AMRs) is their intelligence. While warehouse visitors today may be entranced by the robots’ ability to move tangible goods, the magic actually lies in the software that enables AMRs to avoid collisions, analyze traffic, steer clear of bottlenecks, and show awareness of their surroundings—in a word, to think.

Once truly groundbreaking, goods-to-person automation is now “table stakes” for the AMR industry, says Jerome Dubois, co-founder and co-CEO of 6 River Systems, a Massachusetts-based robot maker that was acquired in 2019 by the e-commerce platform Shopify. “The Kiva robot itself was innovative, but it was a fairly simple device,” he says. “Software is now driving the acceleration and the value that people are realizing from robotics, with algorithms for replenishment, slotting, work assignments, and workflows.”

In Dubois’ view, the chief strength of AMRs—essentially, what enables them to accelerate the flow of goods through the warehouse—is their awareness of how inventory is stored and allocated, as opposed to their physical capabilities, such as how fast they move, how much weight they can carry, or how safely they operate.

“Back in 2017 when we launched our AMR [a collaborative robot called “Chuck”], we had three times [more] software engineers than hardware engineers. And today that number is four times,” he says. “Not that it’s easier to make the hardware, but with software, there is more potential, opportunity, doors to unlock. We love Chuck, but it doesn’t do anything without the software.”

As for what opportunities the company’s software engineers are currently exploring, it’s all about making each interaction more efficient, Dubois says.

“For any goods-to-person robot, the more work it can accomplish per hour of runtime, the more benefit you get,” he explains. “So our goal is to figure out how to get more work assigned to a Chuck as it moves from A to B to C; how many picks we can get off a shelf or from a tote at one time; or how else we can do this work so each move is as task-heavy as possible.”

PLAYING WELL WITH OTHERS

In fact, an AMR’s greatest contribution to the fulfillment workflow may lie in its ability to streamline handoffs and interactions all the way down the line. Just as AMR intelligence can enhance productivity inside a DC, it can also help speed the movement of products through a larger network that includes multiple fulfillment centers and retail stores, says Akash Gupta, co-founder and CTO of GreyOrange, an Atlanta-based warehouse automation and robotics vendor.

Today’s complex distribution networks require pinpoint-accurate visibility over inventory at every node, he explains, adding that AMRs can help meet that need by providing a constant flow of data as they move goods, count units, run analytics, and track exceptions.

“It requires lots of intelligence because before you can think about executing the work by robots, you need to communicate between nodes, and you need to support a large number of both robotic and nonrobotic devices,” Gupta says. “Maybe in 10 years, we’ll have fully autonomous warehouses, but in the next five to seven years, a large portion of DCs will use a combination of autonomous, semi-autonomous (robot-assisted), and manual operations. So the software needs to be flexible enough to send real-time feedback” to all the players, he says. 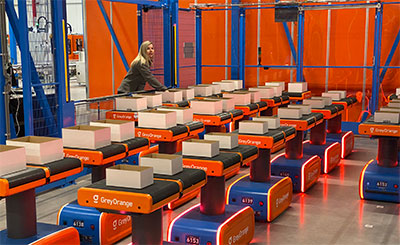 AMR intelligence can enhance productivity inside a DC and help speed the movement of products through a larger network that includes multiple fulfillment centers and retail stores, says Akash Gupta of robotics vendor GreyOrange.

That need for software flexibility also comes into play in DCs that use equipment from multiple vendors, adds Sean Elliott, CTO for software at Körber Supply Chain, a German supply chain technology solution developer. Many DCs today include robots from a variety of suppliers, each one assigned to different tasks, he says. A company might use one brand of robot to pick and palletize goods, another to move loaded pallets, and a third to load them on trucks. In that kind of operation, companies rely on software to handle the “decisioning” process, assign each robot to its own specialty, and optimize the workflow.

Faced with that complex mission, AMRs need the ability to focus on multiple goals at once: completing their immediate job of moving goods, communicating with other robots to ensure that handoffs happen on time, and reporting the results of every step to the software that oversees the network.

If that profile sounds almost like a human employee’s job description, that’s because it is. And the comparisons don’t end there. Like humans, robots perform best when they’re “aware” of their own strengths and weaknesses in the same way human workers are, Elliott says. For instance, that might mean the AMR is able to communicate how much battery charge it has left or respond to a query about its payload capacity.

Robots focused only on lifting and moving goods would not be able to answer those questions, much less collaborate with other bots and human workers, plot routes through bustling warehouses, or generate continuous streams of inventory-tracking data.

In an industry that relied for decades on hard-working laborers with clipboards and pencils, the addition of robotic teammates with precision intelligence promises to trigger a revolution in fulfillment efficiency and operational awareness. And in appreciation of AMRs’ growing brainpower, the sector may have to abandon old comparisons to dancers and skaters, and adopt new terminology that reflects the robots’ “smarts.” Or maybe we can just hang diplomas on each robot’s frame and applaud as it rolls into the DC.