We use cookies to provide you with a better experience. By continuing to browse the site you are agreeing to our use of cookies in accordance with our Cookie Policy.
Home » Driver shortage reaches record high

ATA says the trucking industry is short 80,000 drivers, a figure that could double by 2030 if widespread challenges go unaddressed.

The trucking industry is short 80,000 drivers, and if economic pressures and a host of other challenges persist, that number may rise to 160,000 by 2030, according to the American Trucking Associations (ATA), which released its 2021 Driver Shortage Update Monday.

Long-held trucking industry challenges such as lifestyle issues, driver pay, high turnover, and difficulty attracting younger workers and women have combined with pandemic-related challenges to drive up the number of needed drivers. This year’s figure is up from a high of 61,000 in 2018. Levels had fallen in 2019 and began to climb again in 2020, according to ATA Chief Economist Bob Costello.

“Since we last released an estimate of the shortage, there has been tremendous pressure on the driver pool,” Costello said in a statement. “Increased demand for freight, pandemic-related challenges from early retirements, closed driving schools and DMVs, and other pressures are really pushing up demand for drivers and, subsequently, the shortage.”

In a press conference Monday Costello said there is no single solution to the problem and that the trucking industry, shippers, and government all play a role in addressing the issue.

“Supply chain problems of today are a glimpse into our future if we do not fix this,” he said, pointing to delays, disruptions, and product shortages that have slowed supply lines over the past year.

ATA has been tracking what it terms an industry-wide driver shortage since 2005. The 80,000 figure is the difference between the number of drivers currently in the market and the optimal number of drivers based on freight demand. ATA says it uses demographic driver data, population growth by age data, tractor counts, and projected economic and industry growth information to model and forecast the truck driver shortage.

Attracting younger workers via the Drive Safe Act—an industry recruiting and training initiative that is included in the infrastructure bill being debated in Washington—as well as finding ways to attract more women to the industry and addressing lifestyle issues in the long-haul sector are key points, Costello said. Driver retirements are fueling the need for replacements, the report shows, and less than 7% of the industry’s workforce is made up of women.

Other issues include the need to address infrastructure problems—including a lack of truck parking spots which can cause drivers to stop driving earlier in the day than they need to so they can get a spot for the night, and congestion, which limits drivers’ ability to safely and efficiently make deliveries.

The Federal Motor Carrier Safety Administration’s (FMCSA) drug and alcohol clearinghouse is also having an effect, by removing drivers who fail the federally mandated drug testing. Costello said many of those drivers are “not even attempting the return-to-duty process” that is part of the clearinghouse, a program he said ATA supports but that is nevertheless tightening driver supply.

In addition to industry and government efforts to improve pay, working conditions, and infrastructure, Costello said shippers can help by working to improve turn times and keeping wait times to a minimum—steps that can help keep trucks moving so they can haul more freight.

“Because [there] are a number of factors driving the shortage, we have to take a number of different approaches,” Costello said. “The industry is raising pay at five times the historic average, but this isn’t just a pay issue. We have an aging workforce, a workforce that is overwhelmingly male, and finding ways to address those issues is key to narrowing the shortage.”

As part of the 2021 study, ATA estimates that over the next decade, the industry will have to recruit nearly 1 million new drivers into the industry to replace retiring drivers, drivers that leave voluntarily or involuntarily, as well as additional drivers needed for industry growth. 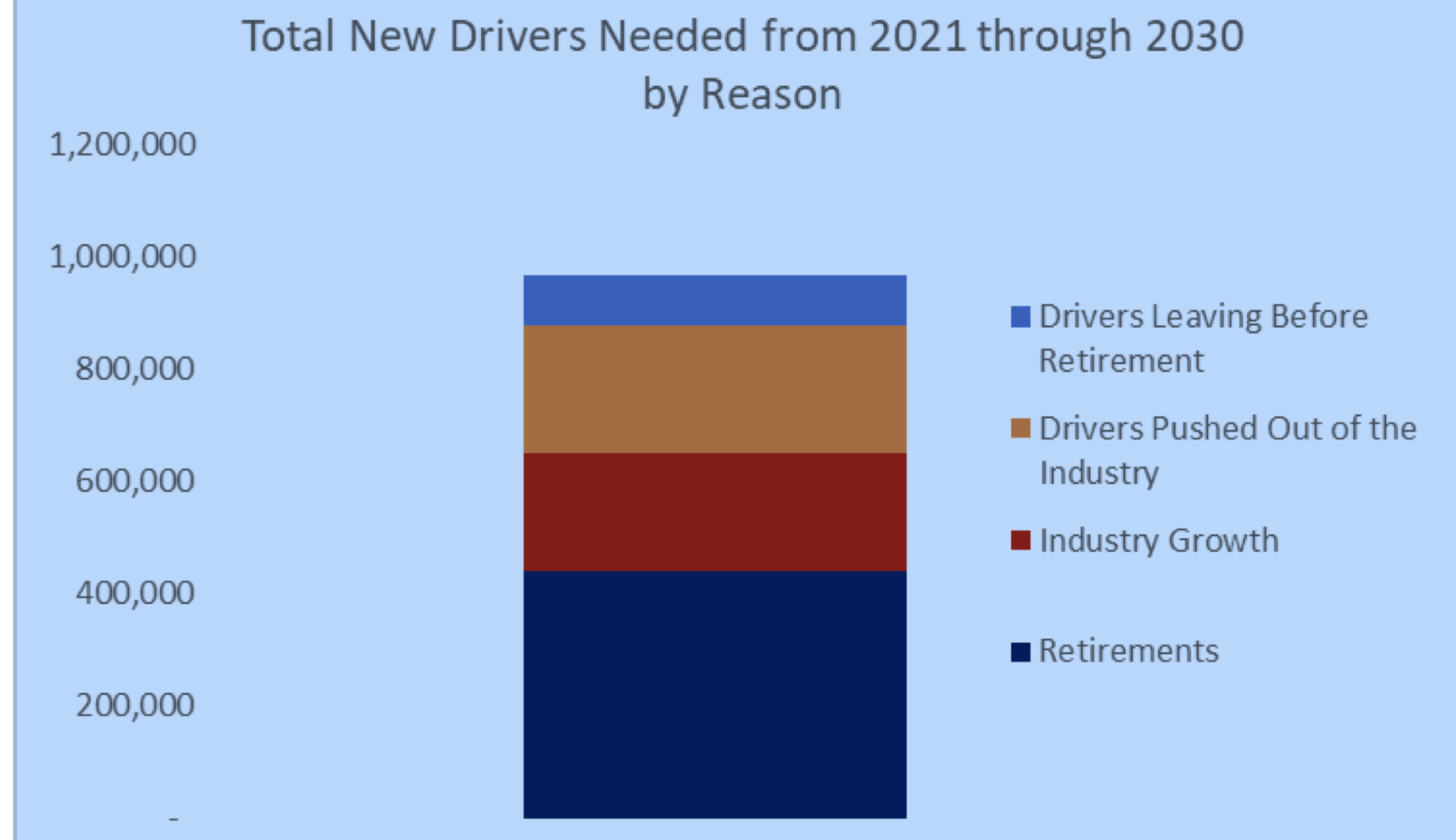