We use cookies to provide you with a better experience. By continuing to browse the site you are agreeing to our use of cookies in accordance with our Cookie Policy.
Home » Pivot point
AIR FREIGHT

The tight capacity and high rates caused by the pandemic have had severe repercussions for the air freight industry, and there’s more turbulence ahead.

This story first appeared in the Special Issue 2021 of CSCMP’s Supply Chain Quarterly, a journal of thought leadership for the supply chain management profession and a sister publication to AGiLE Business Media’s DC Velocity.

Covid-19 rattled the global air freight industry as much as any other logistics sector last year, causing constrained capacity, service disruptions, and rising costs. While carriers and intermediaries have deployed creative stopgap solutions and shippers have demonstrated flexibility, the basic math of supply and demand remains daunting.

Overall air freight volumes were down year-on-year for 2020 due to lockdowns early in the year. According to International Air Transport Association (IATA), cargo ton kilometers (CTKs) fell by nearly 11%. In spite of the drop in overall demand, however, rates skyrocketed, as capacity saw an even steeper net decline.

Pre-Covid, roughly 60% of global air cargo had been carried in the bellies of passenger planes. This fell to about a third by year-end 2020 as belly capacity from passenger flights dropped by 53% due to flight schedule reductions and cancellations, according to IATA figures.1 Airlines have responded by increasing both the size of their freighter fleet and daily utilization, but even those efforts were not enough, and overall available cargo-ton kilometers (ACTK) saw a net reduction of 23% for the year.

As a result, freight rates for the remaining capacity surged. The Drewry East-West average air freight rates for April and May 2020 were more than double the consistent averages seen in past years (see Exhibit 1). While rates have moderated slightly since, they remain historically high. The average spot rate from Shanghai to North America, for example, peaked at $12.78 per kilogram in May 2020, then fell by more than half to $5.70 in late March 2021—still about 70% above the March 2019 rate of $3.30. 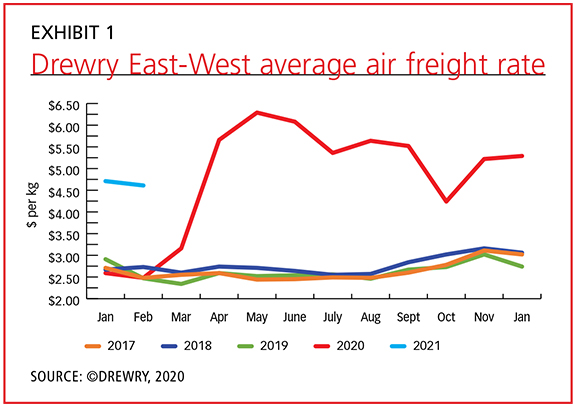 In response to the tight capacity and sky-high rates, some freight forwarders and shippers of high-value, time-sensitive freight chartered aircraft last year. Apple, for example, chartered more than 200 private jets to ship devices in 2020, a single-year record for the company. At the same time, it shipped less urgent AirPods and other peripherals by sea for the first time and increased its use of ocean freight for older iPhone models to free up air freight capacity for the iPhone 12. Another technology company that chartered planes resold excess capacity to mitigate costs. The trend toward charters does not appear to be dissipating, as some freight forwarders are suggesting that they will continue to offer them as part of their permanent mix of service offerings going forward.

This response is not surprising given that in the second half of 2020 and the first half of 2021, demand for air cargo has been strong and has outpaced the return of capacity. The global surge in e-commerce as brick-and-mortar businesses closed and people sheltered in place meant that less freight was being shipped as palletized loads and more was being sent as parcels with time-definite deliveries. As a result, shippers shifted a significant portion of their cargo away from full truckloads and toward air and less-than-full truckloads. At the same time, the need to quickly position medicines, hospital supplies, and medical equipment further boosted air freight demand. Meanwhile shippers of perishable produce, just-in-time parts, and other urgent freight switched to air from ocean to avoid container shortages, unreliable ocean shipping schedules, and soaring ocean shipping rates.

Pandemic repercussions will continue to affect air freight demand and capacity for the remainder of 2021. Vaccines initially took much of the available air cargo capacity, crowding out other time-sensitive freight. While new vaccine approvals and added production sites have already helped disperse demand in the U.S., the extent and timelines for vaccine distribution to the rest of the world remain uncertain. At the same time, air cargo will remain a critical option for replenishment, as companies look to mitigate sudden shortages and restart disrupted supply chains.

Air freight demand and capacity could also be affected by an increase in global trade. North American air cargo capacity declined less at the height of the pandemic, and recovered faster, than elsewhere in the world. But most of the growth in air cargo demand has occurred elsewhere, notably within Asia, suggesting that even as capacity recovers worldwide, markets will remain tight.

However, the extent that pent-up global demand will affect air freight in 2021 is currently unclear due to trade uncertainty. U.S.-China relations are likely to remain static for now, as strategic and competitive differences offset broader economic interdependence. However, the U.S. could rejoin the Trans-Pacific Partnership or otherwise accelerate the ongoing migration of trade from China to lower-cost countries in Asia such as Vietnam and Indonesia. If this occurs, air freight will be critical to mitigating longer ocean transit times and infrastructure constraints in those markets.

Meanwhile, Brexit-related customs clearance delays, plus global ocean equipment imbalances and port congestion, have dramatically increased air cargo and charter demand in the United Kingdom and the European Union in early 2021. And one-off emergency situations—such as when the grounded containership Ever Given blocked the Suez Canal for six days last March—have also boosted demand for air freight, as shippers seek to work around congestion delays and meet priority delivery commitments.

At the same time as it has been experiencing demand volatility, the industry has also seen a significant shift in the dynamics of passenger versus nonpassenger cargo. Case in point: Los Angeles area airports saw a 67% plunge in passenger traffic, versus a 9.2% increase in cargo tons moved during 2020. Given freight capacity constraints and predictions that passenger traffic is unlikely to return to pre-pandemic levels until 2024, this trend is expected to have staying power.

Many airlines are not only expanding their all-cargo fleet size and schedules but also converting passenger planes to all-cargo operations. Through September 2020, nearly 200 global airlines converted some 2,500 passenger jets, representing about 10% of the global fleet.

Short-term conversions can take two forms: fastening cargo onto seats and covering it with netting or removing the seats entirely. Permanent conversion involves gutting cabins, modifying cockpits, sealing emergency exits, and installing cargo hatches—a process that costs millions of dollars and takes three to four months. Boeing expects that two-thirds of the 2,430 freighters it will deliver by 2039 will be passenger-to-freighter conversions.

Such a pivot extends beyond retrofitting equipment to rethinking routes, schedules, and airport cargo handling operations, including the handling of hazardous and other specialized cargoes. It also entails changes in corporate culture and raises business model considerations regarding relationships with shippers and forwarders.2

More than a year into the pandemic, carriers have gained valuable insights about how and when to convert planes to freighters and are refining their relationships with large freight forwarders. For example, Ceva Logistics purchases dozens of flights every week to guarantee space—an option likely not available to smaller forwarders. Indeed, we may see more forwarder consolidation in the future as others try to achieve this level of scale, meaning carriers will find themselves dealing with fewer forwarder customers with more clout.

On the shipper side, lessons learned center on the relative permanence of recent market shifts. Meaningful capacity growth will not return until passengers do, suggesting sustained dependency on all-cargo capacity and charters, as well as flexibility among modes. Laboratory products distributor Thomas Scientific, for example, continues to benefit from a multimodal strategy including motor, ocean, and air adopted last year as demand surged for Covid test kits.

Shippers have also learned the benefits of adopting technology solutions. Most made a faster-than-expected transition to digital air freight marketplaces, which offer convenient e-booking with space and rate transparency for as much as 15% of global airfreight capacity. For example, the WebCargo booking platform, which claims to have 22,000 users, reported a dip in revenue as Covid peaked in February-March 2020, but quickly recovered by June. Similarly, transport company Kuehne+Nagel credits digitalization and automation in its booking, invoicing, and documentation processes for an increase in its air cargo volumes—despite capacity limitations.

With shippers still learning from the pandemic and working to restructure their supply chains to add resilience, the potential impact on air cargo has yet to fully play out. It is still unclear whether steps such as multimodal diversification and changes to contingency planning and safety stocks will create new business opportunities for air cargo carriers or if they will just erode volume. The “new normal” is still, for now, a work in progress.

Balika Sonthalia is a partner in the strategic operations practice of Kearney, a global management consulting firm, specializing in procurement, supply chain, and logistics.

Ben Kuo is a principal in the strategic operations practice of Kearney.

“With Freight Rates More Stable, Why Do My Freight Costs Keep Going Up?”

DCV-TV 4: Viewer Contributed
Lately people have been asking me a pressing question: “Mike, if there’s a freight recession headed our way, shouldn’t we be seeing freight rates and our freight costs going down?”Ideally the answer to that question would just simply be “yes.” However, these are not simple times. Which is why the answer to this...