We use cookies to provide you with a better experience. By continuing to browse the site you are agreeing to our use of cookies in accordance with our Cookie Policy.
Home » The good kind of peer pressure: interview with Adam Schafer
THOUGHT LEADER

The good kind of peer pressure: interview with Adam Schafer

Since 2017, Adam Schafer has overseen Intel’s supply chain sustainability programs. These efforts don’t stop at Intel’s own four walls but also include working with suppliers to adopt more sustainable practices. 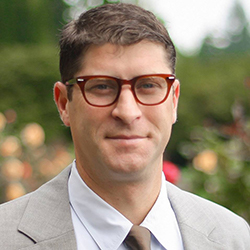 Adam Schafer is a believer in the power of positive peer pressure. As director of supply chain sustainability for semiconductor and tech giant Intel, he keeps an eye not just on his own company’s sustainability efforts but also on those of his suppliers and his suppliers’ suppliers.

He does not mind being his suppliers’ keeper; nor is he afraid to use Intel’s influence to nudge them to stay in line with industry standards around such issues as human rights, environmental protection, green chemistry, and diversity. This is no small task: Intel’s supply chain consists of more than 570 supplier factories in approximately 90 countries and involves more than 90 different commodities.

To Intel and Schafer, it’s not simply a matter of Intel’s using its size and clout to browbeat its suppliers into compliance. The company works collaboratively with its suppliers to achieve those goals and is thoughtful about balancing carrots and sticks. One big area of focus is around human rights, particularly in regard to forced and bonded labor, where a person is forced to work in order to pay back a debt such as recruitment fees.

Intel isn’t resting on its laurels. The company last year unveiled its RISE 2030 corporate responsibility strategy, which calls for Intel and its suppliers to step up their efforts to create a “more responsible, inclusive, and sustainable world, enabled through technology and our collective actions.” Some of the RISE 2030 supply chain goals include expanding responsible sourcing efforts beyond conflict minerals, enabling greener and circular chemistry strategies across the industry, and scaling its human rights programs across 100% of contracted tier-1 suppliers and Intel’s higher-risk tier-2 suppliers.

As for Schafer, he has been at Intel for a little over 20 years. While 15 of those years have been in supply chain, he started his career as a process engineer in research and development. He brings this fact-driven engineering and research mindset to his current sustainability role. While he enjoys feeling like the work has a positive impact on the world and the people who work for Intel and its supply chain, he also strongly believes that sustainability makes good business sense.

“It’s a fundamental part of running a viable and valuable supply chain,” he says. “[Supply chain management] is not just ‘are you going to get it there on time and how much is it going to cost.’ There’s much more to it. Sustainability is really a core value-add and a unique function that all supply chains need to do whether they realize it or not.”

Q: What are the roots of Intel’s supply chain sustainability program?

The first was the establishment of the Electronic Industry Citizen Coalition (EICC), which is now the Responsible Business Alliance (RBA). The EICC really helped drive the code of conduct for our industry. It aligned our suppliers, our customers, our fellow travelers. [Intel] was one of the founding members in 2004–05, and we have always been among the most active and/or leading companies in that organization. I personally sit on the board now, as did my predecessor.

The second was an emphasis on the area of diversity. This was a real drive from the top at Intel in regard to our workforce diversity—the people we have in our employee base and management. Now, that focus on diversity also includes supplier diversity, or where we are spending our money.

The third thing is the notion of conflict minerals and the issues around tantalum, tungsten, and gold. Before there were standards, due diligence, and smelter audits, we, along with many other important partners, were at the forefront of understanding that this was an issue. That’s really driven a responsible material focus for us. Now, a lot of other companies and industries have either caught up to us or are leading in other ways. For example, the automotive industry is doing really tremendous work in cobalt. We only use a little bit of cobalt. So, where we have led in tungsten, we’re really supporting [automotive companies] and taking advantage of the standards they are developing in cobalt.

Q: How has Intel’s sustainability program evolved over the years?

A: One area that has grown in importance is human rights and [the focus on addressing] forced and bonded labor in the industry. Treating people fairly has always been part of [Intel’s] code of conduct, but it really came to the forefront in 2014–2015. We are now looking at manufacturing outsourcing and saying, “The people in those factories need to be treated according to a code of conduct that we can not only sign up to [ourselves] but also sign our suppliers up to through their contracts.”

Q: What drove this evolution? Was it internal from Intel or external from customers and board members?

A: It was some of each. You had very famous incidents, like the one with FoxConn and the Apple iPhone [the 2010 revelation of substandard working conditions and employee suicides at FoxConn factories where iPhones were manufactured]. [That incident] helped open our eyes and led us to say, “OK, if this is happening there, what else is going on with original equipment manufacturers (OEMs)?” So that was an internal focus of saying, “Hey, what else is out there? Let’s ask some questions.” Through the consortium EEIC, there were a lot of companies asking questions at the same time. The consortium also provided us with tools for due diligence. So not only could we ask the questions, but we could also apply [these tools] to answer the questions and then apply those findings to help drive improvement.

Q: Can you give a few concrete examples of ways you’ve worked with your suppliers to handle human rights issues?

A: There are many examples, but one big one is the work we’ve done with some of our big suppliers that [employ] a lot of people at sites around world. There are suppliers with 90 to 100 different factories all under one company name. There are times when we have audited one site, and we have found issues. There may be fees, overtime, whatever it is. We have not only worked with them to perform the audit and address the findings but, with some of our very best OEM suppliers, we have also worked with them to help provide materials to share around their sites. So when we find something at one of their sites and we go to the next site, they’re prepared, and then we go to the next site, and they’re prepared. That kind of structural sharing of information not only within companies but also across companies has helped [us address] a number of issues over the years. So that today, we are seeing only 10% of [the issues] we saw seven to eight years ago. We’re still working on that 10%, but our path to finding and solving problems is much faster than it ever was, and that’s something we as an industry can be proud of.

Q: Do you think part of the reason why your suppliers are so open to working with you on sustainability is that the industry as a whole is so focused on this issue of forced labor and fees?

A: Absolutely. They now know that if a problem is found and it becomes public, we and other companies are going to come knocking on their door saying, “Is this kind of thing going on at the site where I’m operating?” They are more and more prepared to answer these questions.

For example, there were issues around a particular site for the large OEM of a consumer electronics company last October. As part of our work with them directly and our work with them on behalf of the RBA, we drove a plan to audit all of their sites across China to proactively ask questions not only about the issue that became public but throughout that environment. The willingness to do that and step up at a corporate level really was driven by that collective leverage that we have.

Q: What would your recommendation be for companies that don’t have the size or influence of Intel?

A: For most industries, you should be able to find a consortium that can help give you that force-multiplier. If you can’t find it through a consortium, you can probably find it through one end or the other of your value chain. It is very powerful for companies to say “I need you, as a supplier, to perform to this code of conduct.” But it’s much more powerful to say “I signed up to a code of conduct, you signed up to a code of conduct, and up the chain—even at the retailer level—there’s a code of conduct. That’s what we are demanding. We’re not asking you to do it for us; we’re asking you to do it for our customers.” That would be an approach I would take if I were starting from scratch.

Q: There seem to be many different definitions of sustainability out there. How would you recommend that companies define sustainability?

A: There are a lot of definitions. It really does matter what is material to your company and what business you’re in. If you’re a manufacturer, it may mean something very different than if you’re a retailer or an integrator or whatever.

For example, Intel is a big brand, so NGOs pay attention to us. But we’re not necessarily a big consumer brand, so they’re going to go after the shinier consumer brands first. But we do get those pressures. In short, that stakeholder map of who cares, how much, and why, is really important in deciding what [sustainability] means to you.

Q: Why do you think the supply chain profession has taken on such an important role in sustainability?

A: I think supply chain has gotten more attention across the board as being where issues are, particularly in the area of human rights. You have great brands from the U.S. and Europe that have risk and exposures in their [external] supply chain that they don’t have at the home office. And that’s a reality that NGOs, media, and others have come to understand. It presents not just a representational risk but also a business continuity risk, a quality risk, and other hard risks to the business. So, whether or not you simply want to do the right thing, it’s also a risk to your business, and that’s where supply chain has become more prominent.

“With Freight Rates More Stable, Why Do My Freight Costs Keep Going Up?”

DCV-TV 4: Viewer Contributed
Lately people have been asking me a pressing question: “Mike, if there’s a freight recession headed our way, shouldn’t we be seeing freight rates and our freight costs going down?”Ideally the answer to that question would just simply be “yes.” However, these are not simple times. Which is why the answer to this...