We use cookies to provide you with a better experience. By continuing to browse the site you are agreeing to our use of cookies in accordance with our Cookie Policy.
Home » Shipping supply company turns up the lights
Applications

If you’ve ever worked in a shipping room, you’re probably familiar with Uline and its famous 800+ page catalog. Based in Pleasant Prairie, Wisconsin, the company describes itself as North America’s leading distributor of shipping, industrial, and packaging materials. It currently carries more than 37,500 products, ranging from strapping tape and mailing tubes to hand soap and crowd-control barriers.

Last year, the well-known distributor found itself on the other end of the buyer/supplier equation. The company needed a new lighting solution for its 800,000-square-foot warehouse in Lacey, Washington. Specifically, it was looking to replace its metal halide lighting with something brighter, with the end goal of making pickers’ and packers’ jobs easier and ensuring accuracy. Basically, what it wanted was a system that would provide the maximum lighting output allowed by the Washington State Energy Code.

For help with the project, Uline turned to its long-time partner Cree Lighting, a specialist in commercial, industrial, and residential LED lighting. But the two companies quickly realized there would be more to the project than simply choosing replacement lights. They also needed to figure out the advanced controls capabilities. For that, Cree Lighting enlisted Synapse, one of its lighting controls partners, to design wireless controls for its client’s facility. 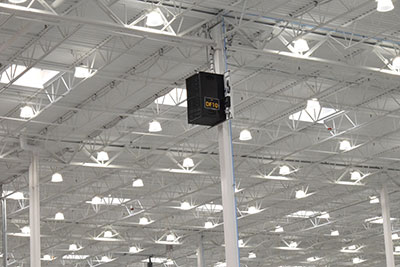 By moving from metal halide luminaires to Cree Lighting's KBL Series units, Uline has saved 50% on its energy output.

The solution they came up with features Cree Lighting’s KBL Series high-bay luminaires integrated with Synapse’s SimplySnap controls. Over the course of the project, a total of 3,014 of the luminaires were installed throughout the facility.

As for their choice of luminaires, the KBL Series units offered advantages on a number of fronts, according to the manufacturer. For one thing, they’re energy-efficient, producing more light while consuming less energy than traditional metal halide fixtures. “The amount of light coming from the KBL Series luminaire sets it apart from other high-bay fixtures on the market,” said Ryan Loggins, project manager for Cree Lighting, in a release. But the light is neither harsh nor blinding, he noted. “Even though [the KBL luminaires are] producing an abundance of light, people working underneath [them] still experience visual comfort in a properly illuminated space that doesn’t cause headaches and is glare-free.”

For another, they’re convenient. The luminaires feature an instant start, so they turn on when needed without delay and have dimming capabilities straight out of the box. They’re also easily customizable: More levels of control—such as occupancy detection, daylight harvesting (which dials back the electric lights when daylight is available), scheduling, and alerts—are available with a wireless control platform to manage the luminaires’ operation.

As for the controls system, Uline had sought a solution that could tie the lighting system into the main building systems and would provide simple easy-to-use controls. The SimplySnap system—a scalable platform that can control up to 10,000 lights, manage multiple gateways from a single user interface, and integrate with a building management system—is designed to do just that.

Then there are the energy savings. By moving from metal halide luminaires to the KBL Series units, the company has saved 50% on its energy output. It has realized an additional 30% energy savings due to the occupancy-detection feature and another 5% from daylight harvesting. As a result, it is now able to run the facility at approximately 20% of its former operating cost, all while meeting the stringent Washington State Energy Code.

Uline reports that the project went off without a hitch. “The collaboration between the Cree Lighting and Synapse teams has been outstanding,” Mike McConnell, Uline’s director of engineering, said in the release. “They worked together to fine-tune the way in which the Synapse controls are integrated into the lighting product. We’re here today with a partnership that positions us well for the future.”

That future may have already arrived. Based on the Washington project’s success, Uline has since installed Cree Lighting luminaires integrated with Synapse SimplySnap in several other locations, including the warehouse at its Wisconsin headquarters facility.