We use cookies to provide you with a better experience. By continuing to browse the site you are agreeing to our use of cookies in accordance with our Cookie Policy.
Home » Ports pivot as ship lines “blank” sailings to control capacity, shave costs, prop up rates
MARITIME/PORTS

The coronavirus pandemic shook the maritime industry to its core. Ports and vessel operators moved aggressively to adapt. Where’s the light at the end of the Covid-19 tunnel for ocean shippers?

The coronavirus pandemic has roiled the maritime industry unlike any economic or natural disaster event before it. Blank, or canceled, sailings have hit record levels. Operators are laying up vessels, some never to return to service. Seafarers have been stranded on ships for months at a time, well past their contract expirations, essentially quarantined at sea. Slow-steaming and other cost-cutting tactics have been deployed, new ship orders and cap-ex plans slashed.

The ripple effect on the nation’s ports has been dramatic. They’ve reset operations to cope with fewer ship calls, adjusted to having office staff work from home, and for those longshoremen, stevedores, truckers, and other essential workers still on the dock, acquired protective equipment and instituted new procedures to protect their health and safety.

And while many maritime and port executives are encouraged by a slow reawakening of the economy and a modest recovery in import volumes, uncertainty abounds, and a full recovery remains elusive—at least for this year.

Containership lines have seen demand contract with unprecedented speed and scope across all trade lanes and, in response, have canceled hundreds of sailings, says Lars Jensen, CEO of SeaIntelligence Consulting. “Carriers have been extremely diligent in removing capacity [such that] freight rates in many cases have gone up,” he adds. The reining-in of capacity has been so tight, Jensen says, that “[carriers] will likely be more profitable in the second quarter than the first” of this year.

Industry consolidation, Jensen notes, “is finally taking hold. The market needed to get to a point where there were sufficiently fewer players such that the others could be disciplined with capacity management.”

Copenhagen, Denmark-based A.P. Møller Maersk, which operates some 700 container vessels, has kept its nominal fleet capacity flat at around 4 million twenty-foot equivalent units (TEUs) since 2018, says spokesperson Tom Boyd. Capital expenditure discipline remains key. “We have no plans for new orders of large vessels,” he adds. The carrier’s strategy for weathering depressed volumes has been maintaining a tight balance between capacity and demand, and “as a logistics operator with assets, to stay agile to respond to market fluctuations quickly and mitigate costs while responding to customers,” he says.

Global containership operator Hapag-Lloyd “will refrain from ordering any new ships, and even if new orders become strategically necessary … we will only make them when the market environment is right again,” says company spokesman Tim Seifert. The Hamburg, Germany-based ship line has “adapted our service network to align with lower demand, and we have screened all cost categories,” he adds.

And vessel operator Mitsui O.S.K. Lines (MOL), Japan’s biggest shipping line, is shrinking its fleet of 800 ships by 5% over the next three years in response to what it expects to be a significant decline in global trade volumes driven by the coronavirus pandemic.

Like their ocean carrier clients, port operators are scrambling to adapt to the new reality. “With [the number of] blank sailings … we see a double-digit downturn [in activity] through the summer,” says John Reinhart, executive director of the Virginia Port Authority (VPA). The port was notified of 79 blank sailings, or canceled ship calls, starting in April and extending through the end of August, equaling a loss of some 109,000 containers. In response, the port idled one of its facilities, reduced gate hours during the week, and suspended Saturday gate hours.

Successfully navigating the pandemic’s challenges, Reinhart says, has required “understanding your data, [adjusting] your infrastructure [and resources], and making intelligent decisions to deliver exceptional service” while being fiscally responsible. And, he stresses, taking early and aggressive steps to protect the port’s employees, all of whom are considered essential workers.

At the outset, the port established a Covid-19 planning task force, which initially met three times a week. Among its decisions: Those who could were instructed to work from home. Workers still in offices were separated for appropriate social distancing. Touchless temperature scanners and hand-sanitizer stations were installed. Extra sanitizing steps were implemented for public spaces. A “no visitor” policy was put in place. Personal protective gear was acquired and provided. And technology was leveraged, using cameras and remote sensors to control container movement and limit people in container yards physically monitoring equipment. “We really put in best-in-class practices and collaborated with many [port constituencies] to keep the port operating and critical cargo moving safely,” Reinhart notes.

Virginia’s strategy was emulated by many other ports, including Los Angeles, Houston, and Oakland, California, all of which moved aggressively to protect workers and adjust for fewer ship calls and lower volumes.

PORTS PUSH AHEAD WITH EXPANSION PLANS 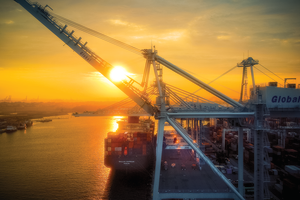 The pandemic, however, has not curtailed port capital improvement plans.

The Port of Oakland’s largest terminal will take delivery in September of three 300-foot-tall ship-to-shore cranes. Ordered by terminal operator SSA at a collective cost of $30 million, each crane can reach 125 feet across a ship’s deck and can service the ultra-large “mega” containerships operating today.

Oakland’s volumes for the first half of this year are down 7.8%, noted Business Development Manager Andrew Hwang, who believes the pace of sailing cancellations will decline into the fall. He also sees vessel operators pushing more cargo onto bigger ships with fewer port calls. The largest near-term variable to a recovery: a potential second coronavirus surge, “which may plunge the country back into restrictions.”

The Port of Los Angeles, which saw 40 canceled sailings in the first quarter and 23 in the second, is handling about 80% of the cargo it normally would this time of year. Nevertheless, Los Angeles is pushing ahead with $367 million worth of infrastructure improvement and expansion projects, says Executive Director Gene Seroka. “We feel we are in a really good position to be ready when the American economy recovers,” he notes.

Seroka, who lived in China during the SARS epidemic, has seen firsthand what a virus outbreak can do. Covid-19, he observes, is “10, 20, 30 times worse” than SARS. He believes the recovery will be long and protracted, looking “more like a hockey stick, a really long one from a very tall left wing.”

A sustainable recovery won’t take hold until consumers feel they can safely go out and resume normal activity. Given the risks, “people are saying they just aren’t ready to go out yet,” he notes, adding, “If you open too fast, there are no replacements. You can’t just put the B team of longshoremen in. We have to be really sharp about policies … and listen to the medical experts.”

The Port of Houston recently reached a milestone for its billion-dollar Houston Ship Channel widening project, receiving Army Corps of Engineers sign-off on its plan. Planned modifications to the 50-mile-long commercial waterway include easing bends and widening the bay reach of the channel to 700 feet and the Bayport Ship Channel and Barbours Cut Channel to 455 feet.

Guenther noted that while business was down 12% to 15% in the second quarter, overall, 2020’s first-half volumes were up about 1%. “I never thought I’d say I’d be thrilled [with the second quarter], but it’s about what we expected,” he says. “Houston is in a great spot. We’re in this for the long game.”

The Port of Virginia is sailing ahead with infrastructure improvements as well. It spent $320 million at the Virginia International Gateway, adding 13 container stacks and 10,000 feet of double-stack–capable on-dock rail, and increasing annual throughput to 1.2 million container lifts. Another $375 million went to redevelop the Norfolk International Terminal’s south-side container yard. The last eight new gantry cranes went into service in July, increasing container-handling capacity by some 60% to nearly 2.2 million containers a year.

NO MORE CHASING FREIGHT AT ANY PRICE

Given containership operators’ history of embracing mega-ships and then chasing freight at any price to fill them, that they are able to profit at all during the worst economic contraction since the Great Depression has shocked many industry analysts.

John Urban has spent 30-plus years in the ocean freight business, as an executive with American President Lines and later as co-founder and president of software company GT Nexus, which nearly 20 years ago established the first online “portal” that let shippers book freight with multiple ocean carriers over a common platform. With Infor’s purchase of GT Nexus several years ago, Urban shifted to consulting and now sits on several boards.

Ship lines have evolved, he says. Once driven by a quest for market share and a penchant for running ships at little or no profit, they are finally embracing capacity discipline, Urban observes.

“Ten years ago, to access 80% of sailings, you had to deal with up to 25 ocean lines,” he recalls. “Today, to get access to 90% of capacity, you need only deal with 10 alliances because there’s been so much consolidation.”

The result: a market where rising or falling prices do very little to change volume, Urban notes. “Carriers have bought into discipline and are finally managing the capacity they have for profit.”

Emerging from the pandemic, transportation management enters its next phase