We use cookies to provide you with a better experience. By continuing to browse the site you are agreeing to our use of cookies in accordance with our Cookie Policy.
Home » Logistics sector growth surges in June

Reopening of the economy drove business activity to 2018/2019 levels, but new Covid-19 outbreaks could put the brakes on growth, LMI researchers say.

Business activity in the logistics sector continued to recover from its April low in June, as the Logistics Manager’s Index (LMI) grew more than 7 points to reach its highest reading in 16 months, according to the latest LMI Report, released today.

Researchers said the post-Covid 19 reopening of the economy this spring played a key role in the growth, as retailers and others increased inventory levels, warehouse space remained at a premium, and transportation metrics began to move in the right direction again. The LMI reached 61.7 in June, up from 54.5 in May and 51.3 in April. An LMI above 50 indicates expansion in the logistics sector; a reading below 50 indicates contraction.

“This is the second consecutive increase after hitting April’s all-time low of 51.3,” according to LMI researcher Zac Rogers, assistant professor of supply chain management at Colorado State University. “This is the highest overall score since February 2019, indicating that, at least for June, the logistics industry seemed to be coming back strong. As noted in May, it remains to be seen whether this trend towards recovery will continue, or whether there will be a subsequent dip linked to the ongoing secondary outbreak. For the moment however, it appears that the logistics industry has begun to regain its footing.”

Rogers said inventory levels and costs remained high during the month and that warehousing capacity reached its lowest level in the history of the nearly four-year index, indicating that businesses throughout the channel continue to hold on to inventory. 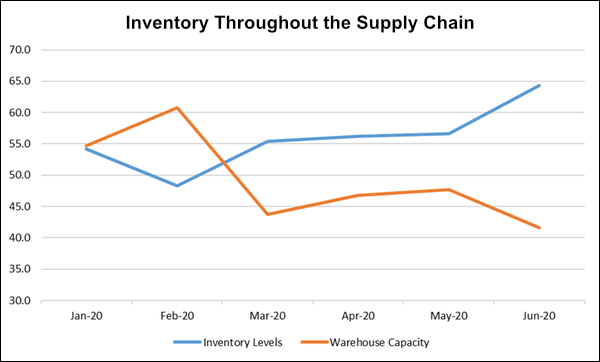 “[That is] crushing warehouse capacity,” Rogers said, adding that retailers, wholesalers, and manufacturers are using considerably more warehousing to simultaneously store excess inventory while also maintaining current service levels. “It’s hard to find warehouse space because of all of the inventory buildup.”

Rogers added that transportation utilization and prices were up by double-digits in June, indicating a rebound in the transportation market. Anecdotally, Rogers said intermodal transportation is increasing as companies utilize railways and other modes of container transportation to supplement storage amid the warehouse shortage.

Overall, the researchers say June’s reading indicates a continuation of the growth trend that began in May, but they caution that the surge may be short lived.

“June is a spark of optimism,” Rogers said, adding that the scaling back of economic reopenings in Florida and elsewhere could change everything. “Whether that’s just a spark or a sign of things to come, we’ll know in July.”